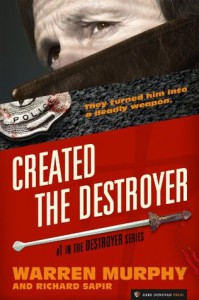 I received a copy of this book from the publishers and this is my honest review.

Remo Williams finds himself transformed from street cop to death row inmate. He's been set up for a crime he didn't commit and doesn't know why. All he knows is that he's been sentenced to death and is sat waiting to be led to the electric chair. Things become even more mysterious when he receives a visitor just before his execution, providing him with the means of beating the chair. After avoiding death, Remo finds himself training to be an assassin and is soon on the hunt for his first target.

This is the first in the Remo Williams series, of which there are quite a few. 145 in fact. Originally written by Warren Murphy and Richard Sapir in 1963 Sphere are now releasing the titles in ebook format.

I had never heard of this series before, neither was I aware that there is a film version of the book made in 1985. I therefore approached the story not knowing what to expect.

This is a quick read, about 170 pages, with short chapters. It reads like a film, which is not surprising given Warren Murphy was indeed a scriptwriter. It comes across very much as an action film. It is a highly improbable synopsis but it works for the kind of story it is and the writing fits. You can tell that the authors had fun writing it, it comes across as boys having fun, creating a secret spy world!

Due to it originally being written over 50 years ago it is somewhat dated, politically incorrect in today's terms and slightly racist, but that in part is showing Remo's character. Remo appears to be somewhat of a sociopath, used as a sneak killer in Vietnam he seems to handle the transition from enforcer of the law to killer with few qualms.

The storyline is far-fetched, fast-paced and somewhat cheesy but it is still a quick enjoyable read.