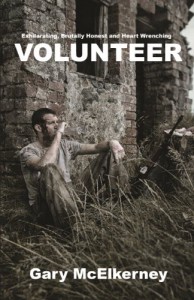 Chris Johnston is a 22 year old from Belfast, volunteering to help build houses in a leper colony in Ethiopia. He's a veteran volunteer, having already worked in Nicaragua and Hungary. He sees volunteering as an adventure, a way of escaping his boring life at home and his parents

I have to admit I didn't really warm to the character of Chris. I found him to be a selfish, and on some occasions annoying, character. His motives for volunteering were not really altrusitc, he wanted an adventure and a free holiday so thought volunteering in Ethiopia. He decides on a whim to leave the group he had travelled with to help as a medic in a remote outpost. This was decided after the other leaders in his group ignored his advice so came across to me as a childlike reaction to rejection. He goes into a war zone and although he does want to help the injured he comments about how he can be seen to be a hero at home, or should he die, how he will have died a hero's death.

When faced with a horrifiying incident he impetuously decides to take matters into his own hands, morphing from charity worker to fighter, angry that he hasn't got his kill. All of these aspects didn't make his character any more appealing to me. However, it did not take away from the impact of what was happening around him and I was keen to find out what was happening to the locals and how he would extract himself from the situation.

This is a well written and often moving book. The descriptions of an ignored war are vivid and thought-provoking. We may not all react as Chris does to the situations he faces but how do we know what we would do if faced with the atrocities he sees? It brings to light that when the cameras and fund raisers are gone and the famine 'cured' the people in nations such as Ethiopia don't always live happily ever after.