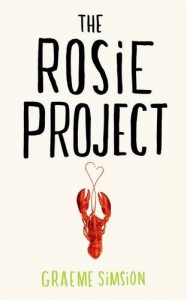 I originally read a library version of this book but also obtained a copy from the publishers via Net Galley which I requested for review purposes and which was provided in return for an honest review.

Don Tillman is getting married. He just doesn’t know who to yet…

The Wife Project will solve that problem. He has designed a 16-page questionnaire to help him find the perfect partner. She will most definitely not be a barmaid, a smoker, a drinker or a late-arriver.

Rosie Jarman is all of these things. She is also fiery and intelligent and beautiful. And she is on a quest of her own, to find her biological father – a search that Don, a genetics professor, might just be able to help her with.

The Wife Project teaches Don some unexpected things. Like why earlobe length is an inadequate predictor of sexual attraction. Why ice cream tastes different in New York. Why he’s never been on a second date. And why, despite the best scientific efforts, you don’t find love, love finds you....

Don Tillman likes routine. Everything is scheduled from bathroom cleaning to Tuesday nights being lobster night. He’s straight talking – because that’s the only way he can be.He has two friends, his colleague Gene and Gene’s wife Claudia, lives on his own and works as a genetics professor.

Don has decided he needs a wife. The obvious solution to him is to create a questionnaire to sift through all the potential candidates to find the correct one. He doesn’t want a drinker, smoker, perpetually late barmaid.

Into his life walks Rosie Jarman, a tardy barmaid who wants Don to help her find her biological father. As the story develop we see Don go on disastrous dates, learn to make cocktails, travel to New York, discovers things about himself he didn’t know and learns to fall in love.

Sometimes you read a blurb on a book and think this will be a favourite, without evening starting to read it. This was one of those books. I knew I would love it, my only worry was that I would perhaps not love it as much as I anticipated. I shouldn’t have been concerned.  It’s rare that I give a book 5 stars, even rarer that I add a book to my list of all time favourites and one that I would recommend repeatedly. This book however is one of them. However, the trouble with loving a book so much is the fear of writing a review that doesn’t do the book justice.

It’s hard to find fault with this book, except that I wanted it to continue! The interaction between Don and the various people in his life was a joy to read. He is remarkably clever in a learned way but fails to see things as perhaps you and I would. For example he accepts that Gene and Claudia are in an open marriage, as he see’s Gene flirt and have dalliances with other women. However as he discovers more about himself and the reason why he is as he is, Don learns that things he accepted such as this are not the norm.

He doesn’t believe he can empathise with people so will never fall in love or make new friends. He’s romantic without realizing it – saying to Rosie at one stage “It would be unreasonable of me to give you credit for being incredibly beautiful” . As Rosie influences his life more and more, and he steps away from the norm, his view of himself and the world changes. He makes new friends and realises he is in love with Rosie and that he can still be himself outside the little world he has created.

I read the hardback version of the book, borrowed from the library and have waited impatiently for the paperback edition before I purchase it. Not because of any monetary reasons, simply because when I’m waving the book in the face of every person I meet, telling them to read it, if I accidentally swipe them on the head, the paperback won’t hurt as much!

If the synopsis sounds good to you read this book. If you like it half as much as I do, you won’t be disappointed.