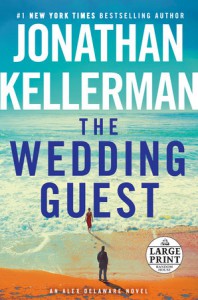 A saints and sinners themed wedding at a former strip club. What could possibly go wrong? Well the body of a young woman found by one of the bridesmaids throws a spanner in the works. Detective Milo Sturgis gets the feeling this will be a weird one and so calls in the help of his friend Alex Delaware. Soon Milo and Alex are on the hunt for a vicious killer.

When you get to the 34th book in a series there is always the chance that the writing will become staid or the characters boring. There is the possibility of predictability. It may be the case that all those issues are present in The Wedding Guest but this reader managed to overlook them to the point of not really registering them.

It says much about the characters, and the author, that a series is still a best seller some 34 years after the first book was published. Books are many things to many people, and to me they are escapism. There is something wonderfully welcoming about a book where the characters and writing style are so familiar. Reading the first few pages it really does feel like old friends are greeting you warmly after a lengthy absence.

I was thinking before I started this novel that there was little character development given the age of the series. That said, there was a little more insight into Milo, albeit briefly, which helps round him out and an even briefer look at the relationship between Alex and Robin.

I find it easy to envisage Robin, Milo and the other detectives, Mo, Alicia and Sean. I can even imagine Blanche the dog and what can only be described as possibly hideous glass and unnaturally coloured leather sofas in living rooms depicted along the way. I can’t imagine Alex Delaware. It may have happened in the earlier books but I can’t recall any description of Alex, bar his clothing. For me, he looks like Jonathan Kellerman as that is the only image I can conjure.

Jonathan Kellerman is adept at creating characters who annoy and who therefore, the reader can sort of understand are bumped off. Here the families of the bride and groom are either annoying, creepy or too good to be true. Or so it would seem.

It is always a pleasure to be back with Alex, Milo, Robin and co and The Wedding Guest was no different. The storyline was engaging. A vicious killer is on the loose and Alex and Milo have to track him or her down before they strike again. There are false leads to follow and blind alleys to go down before the truth is revealed. It is of course always difficult to discuss the actual story without giving too much away. It is safe to say though that the storyline is well paced, with just the right balance so that disbelief doesn’t have to be completely be completely suspended.

It is also a little surprising that this series hasn’t been adapted for TV. I could easily see the characters being transported to a small screen. The cast of characters is varied enough to enliven a series, either TV or written, and the setting of LA lends itself to a wide variety of locations, and more importantly, a variety of people, each with their own unique secrets to hide and motives for murder.

A welcome return of one of my favourite literary detectives. Now I just have to wait a year for the next murder to occur.