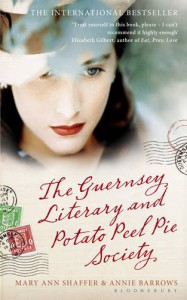 When Juliet Ashton receives a letter from Dawsey Adams on Guernsey she thinks it a friendly and welcome piece of correspondence. She writes back, unaware that doing so will spark an idea to circumvent her writer’s block, set up many new correspondences, introduce her to The Guernsey Literary and Potato Peel Pie Society (and discover the reason for its name), lead her to new friends and to discover what life was like under German occupation. When she visits the island little does she realise that her life will never be the same again.

Don’t be fooled by thinking that a book composed of letters won’t be engaging or interesting. This book is  both and then some. From the first letter this reader was caught up in the lives of Juliet, Sidney, Dawsey and the other Guernsey residents. It may be that some find the writing style difficult to engage with. Usually I’m all for not struggling with a novel. In this instance I’d recommend persevering. Soon the reading letters instead of chapters becomes second nature.

The epistolary technique works in such a way that the reader is left with the feeling that they are intimately involved with the characters; that they have become true friends. The style of the book requires some filling in of gaps, reading responses to unseen questions but it soon feels as if this is the only way the story could be told. Each character is defined by their letters. Their style of writing, of relating incidents and histories is laid out in each correspondence. They are rounded out by portrayals and discussions in other letters so that a full picture can be formed. There are characters that never write letters who become integral to the story, Elizabeth being the main one. She is the one that ties the characters together, that helps bridge any gap between Juliet and the islanders.

The story goes much deeper than a literary society and writer’s block. It is story of the German occupation of Guernsey, an insight into what life was like cut off from the outside world. It is a story of friendship, both old and new, of loyalty and of love.

The moment I turned the last page I wanted to immediately return to the beginning, so loath was I to leave the characters behind. A warm, moving, funny, all-encompassing novel.