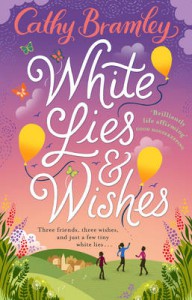 Jo, Carrie and Sarah meet at a friend's funeral and are struck by the fact that time could run out for any of them at a moment's notice. Driven by the idea to seize the day, and helped somewhat by the fact that they don't really know each other, they decide to make a 'wish list' of aims to be completed by September. But what they've said they want to do, and what they actually want to happen might not be the same thing after all...

This is a very easy to read book, in that I soon found myself a third of the way through it after trying to decide which book to read between two choices. The storyline involves the trials and tribulations of three women who all have different aims in life, who want to support each other to get those aims, but who might not have been completely truthful with the others. There are mishaps and misunderstandings along the way. But also there was a lot of self-denial, each of the protagonists were misleading themselves as to what they wanted, and as to how they had got in the position they found themselves before they made friends. Carrie used self-deprecating humour as a defence mechanism but also failed to see her role in why she felt so sad and alone in her marriage. Sarah's determination made her quite selfish when she was trying to please everyone and Jo failed to see what was in front of her, so driven was she to run the family business well.

I did like the characters in the book. Carrie who's shyness hides someone who does not love herself at all, blossoms as her friendship with Sarah and Jo develops. She begins to gain confidence, self-awareness that allows her bubbly demeanour and caring nature to emerge. Sarah likes to be the one to organise, to control aspects of her life. She is desperately trying to juggle life so she can do best by her family. As she gets to know the others it becomes apparent that she in not in control and learning to let go sometimes. Jo is determined and driven, putting her own life on the backburner as she contends with keeping her staff happy and employed and believing she doesn't need close friends but learning that there are benefits to having them after all. All three women before meeting were somewhat loners, with seemingly few friends to rely on they all blossomed as their relationships developed. There were some parts of me I recognised in each of them, Jo's romantic side, Sarah's guilt at returning to work after having a baby and Carrie's lack of self-confidence. I did feel however that sometimes it seemed that there was too much guilt and too much lack of self-esteem from the characters. I sometimes wanted to shake Sarah and Carrie and tell them to look properly at their situations, tell them to talk to their husbands, though that of course would have cut the story very short!

This is an enjoyable, gentle read, perfect for a spot of escapism. I like Cathy Bramley's novels and her writing style and luckily I have a couple of her earlier books to keep me going before her next one is published.