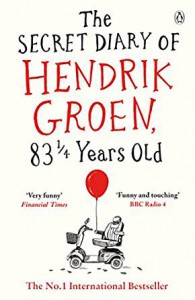 Hendrik Groen is embarking on his 84th year. In order to keep boredom at bay he decides to keep a diary of his days in the care home he in which he now resides. His diary charts the ups and downs of the coming year and how he fights the boredom that threats his days. Who says you have to grow old gracefully?

I have to admit I’m not really looking forward getting older with the potential for loneliness, misunderstanding and my body letting me down. I am, however, looking forward to being curmudgeonly and have been happily practising that for years. I liked the sound of Hendrik Groen’s diary and so thought it would be interesting to read about aging from someone in the know.

The diary format makes the book easy to read, the justification for at least finishing the month meant that I soon found myself well into Hendrik’s year.

The care home houses a host of wonderful characters. The Old But Not Dead Club members are a lovely bunch of people determined to enjoy their twilight years rather than waiting for the end by sitting in their chairs. I looked forward to hearing about the latest trip organised by a member of the club. Hendrik’s new found freedom with his motorised scooter was lovely to read as was seeing his burgeoning friendships develop.

It was interesting to read about the dynamics of the care home, that bullies will emerge whatever the age, that some were only too happy to live in the past, rather than face a potential bleak future and that some fight aging in whatever way they can.

There are also touchingly sad moments. The health scares of Hendrik’s friends, the sad prospect of Alzheimer’s, the risk of falls and the waiting of the inevitable casts a pall over the end stages of life. The book also highlights how easy it is to forget that the elderly were once young. They once fell in love or had their hearts broken, raised families or suffered loss. They danced and sang and were happy and vibrant. And all of their experiences shaped them, made them who they are and remain with them until the end.

The book discusses a wide range of topics in a humorous and often moving way. The political landscape of The Netherlands is discussed, as are the arrangements and funding for elder care, race and religious issues and the question of euthanasia. All of this is told with gentle humour and occasional, understandable rancour.

The Secret Diary of Hendrik Groen is a funny, moving, thought-provoking and poignant portrait of aging and society’s view of the elderly.