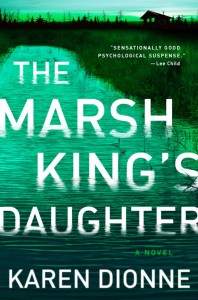 Helena was raised in the marshes. Away from other human contact, it was only ever her, her mother, who she distanced herself from and her father, who she loved and feared in equal measure. It is only when she finds out the truth about her unconventional family that her world is turned upside down. Fast forward and nearly 20 years later her father has escaped prison. The prison she helped put him in. Helena knows only she can find her father. For although he is a hunter, used to surviving in the marshes, he taught her everything he knows. And she is her father’s daughter….

I picked this novel up to have a quick look and soon found myself not wanting to put it down.

There is a darkness that runs through the novel, for obvious reasons given the subject matter. There is also sadness. The reader can’t help but feel for Helena, unaware as a child of her unique and tragic upbringing. Buffeted between love and cruelty the foundations for a regular life so taken for granted by most people are absent for her. Drawn towards her father who provides more obvious emotions of either love or violence, he is perhaps a clearer character to read than her mother. Unaware of the reason why her mother is with her father she simply sees someone who shows no emotions, not recognising until she is older, how her mother did show her affection.

The story draws the reader in. There is something compelling about the writing, the fascination of the violent situation the family revolves around. The narration moves between present day, when the true nature of Helena’s upbringing emerges and to the past, showing how she grew up in the marshes, being taught how to hunt and kill by her father. I looked forward to each viewpoint, finding a dark fascination with the younger Helena’s story. The alternating chapters lent themselves to the justification of ‘just one more chapter’ that saw me flying through the book.

There are limited characters in the book so the story is very much character driven, concentrating mainly on Helena and her father. Helena’s mother is there however, she is in the periphery, a constant presence but often not thought of by the father and daughter. Helena’s father a chilling character, a sociopath concerned only with his wants and needs, using Helena and her mother for those needs when required, discarding them at other times.

Helena is a more rounded character. The reader sees her as both an adult and a child and we can see how her character develops into the present day Helena. She is, to herself, more obviously her father’s daughter. A proficient hunter, though she has her family she still needs to escape them, to spend time alone. However, as she hunts for her father she comes to re-examine her relationship with her mother, coming to realise she has more of her character traits and that her mother did indeed love her.

Despite being set in the wilderness there is something claustrophobic about the story. The reader knows that Helena and her mother are effectively living in a prison, albeit one enclosed by rivers and forests.

This is a novel that is easy to see being adapted for the screen. Karen Dionne herself spent time living in the marshes with a small baby whilst her husband built a shack and the knowledge and experience is apparent in the writing.

This is a taut, gripping, well written story that enthrals and entertains in that unique way dark storylines can. I look forward to reading more from Karen Dionne in the future. Highly recommended.