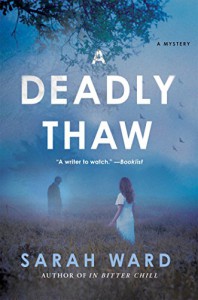 2004 and Lena Fisher is convicted of killing her husband Andrew. 2016 and a body is found in an old morgue. The trouble is the body is Andrew Fisher. So who did Lena Fisher kill 12 years ago? Where has Andrew been for all those years – and why was he murdered now?

Having read and enjoyed In Bitter Chill, Sarah Ward’s debut novel, I was keen to read the latest book to feature detectives Sadler and Childs. The story opens with an intriguing premise, a man supposedly murdered twelve years ago, turns up dead in a mortuary. The story grabs from the outset and pulls the reader along with it until the very end.

Lena Fisher isn’t particularly likeable, and this is even after events surrounding the 2004 murder arise. But her actions become clearer and more understandable as the story progresses. There is a good balance between the police involvement and the involvement of Kat, Lena’s sister, who is also trying to untangle the mess her sister appears tied up in, whilst dealing with professional and personal issues of her own. We get to learn more about Sadler, Connie and Palmer, as well as other characters. This helps round out the story,  their characters and what drives them are just as essential to the storyline as the motive for the murders is. As we read more about the detectives, the more the reader, or this reader at any rate, becomes invested in the story, and in what will hopefully become a long running series. The setting too adds a layer to the story, there is the small town feel to Bampton, one which is used to keeping secrets, and not too keen on sharing them, which adds to the tension.

This novel feels much more assured than In Bitter Chill, and I mean no offence when I say that. There is a confidence to the writing, and the characters and location feel more established on this, their second outing. The topics covered in the novel are emotive and thought-provoking and dealt with a skilled and sensitive way. In my opinion A Deadly Thaw firmly establishes Sarah Ward on the crime writing scene.

A thoroughly enjoyable novel, I’m looking forward to the next Sadler and Childs novel.