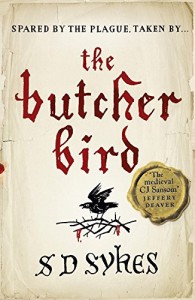 1851. The plague has decimated the population. The working population who survived are agitating for higher wages, the Lords governing the land powerless to increase wages for fear of breaking the decree of the King. In Somershill, Oswald de Lacy, still coming to terms with his new role as Lord of Somershill Manor has problems with his tenants, whose calls for more payment are becoming increasingly more agitated. Then a baby is found killed, impaled on blackthorn bushes. The villagers blame the Butcher Bird, a huge creature known to impale it’s victims on in a similar manner. A local man is accused of summoning the bird and Oswald has to find the true culprit before an innocent man is condemned…

There is something remarkable engaging about historical fiction when it is well done. It can be both warming and comforting and yet challenging and harsh at the same time. It can enthral and make us think, wonder if the scenes portrayed accurately represent life in the past, or make us truly belief the veracity of the scenes that unfold before our eyes. It intrigues and entertains if well done and thankfully The Butcher Bird is very well done.

I very much enjoyed the first novel featuring Oswald de Lacy, Plague Land, so I looked forward to returning to Somershill in the latest novel to feature the young lord and his dysfunctional and often antagonistic family and household. In The Butcher Bird we find Oswald still coming to terms with the events of a few months ago and he is still trying to act in a way expected of the Lord of the Manor, whilst having to cope with a manipulative mother and heavily pregnant and unloving sister.

This is a transportative novel, taking you to the days when superstition was rife, people were still tied to the land, and the Lords of the Manor, and  medicine was limited to herbal tinctures and revolved around humours. The landscape and period of time is vividly portrayed. It is easy to imagine the stench and squalor of the village of Somershill, of the deprivation and chaos of London and the fear the unknown could summon in people. Oswald tasks himself with investigating the murder, armed only with his staunch belief that a human is at fault. He has to fight not only with the belief of others in the supernatural, but with the fact that even the parents of the victim wish to stymie his investigation. Oswald also has to deal with his sister, Clemence, who nearly dies after giving birth and he agrees to allow her step daughters to live with him, which leads to further trouble.

The characters stand out and being excellently portrayed are easy to imagine. Oswald is alone, despite being surrounded by people. In fact he elicits sympathy from the reader, 19 years old and floundering in his new role, his loneliness obvious and the lack of support from his family evident.  His mother is an annoying woman, reliant on her herbalist, devotedly attached to her lap dog, not afraid to be openly rude and prone to hysteria. Oswald’s sister, Clemence, is often mean spirited, yet has flashes of something bordering affection for her youngest brother. Mellowed only slightly by the birth of her son, she is a forceful character who features more heavily in The Butcher Bird and adds much to the story. Even the servants and villagers are easy to imagine, all showing a remarkable lack of respect for Oswald.

The mystery is engaging, upsetting in parts when it deals with the young victim and I was soon wrapped up in the story, eager to follow Oswald and his investigation. There are enough layers and misdirection to entertain and all of the different story arcs tie nicely in together. There is mention of the events detailed in Plague Land and I would advise that this is read before The Butcher Bird, as the story is continued in the latter novel. It is in fact an intriguing aspect to the story and one which provides a great story arc.

I’ve said before that S.D. Sykes fills the gap between Ariana Franklin and C.J. Sansom. The Butcher Bird confirms that position. S.D. Sykes is a welcome addition to the historical crime scene and I look forward to more novels from S.D. Sykes featuring Oswald de Lacy soon.

Many thanks to the publishers for my copy of this book.