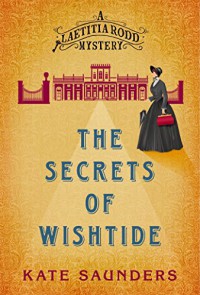 Laetitia Rodd has been engaged to investigate the background of a woman by Sir James Calderstone. Sir James’ son wants to marry Helen Orme and Sir James believes her to be hiding her true background and to therefore be unsuitable for his son. Disguised as a governess, Letty travels to the home of the Calderstones. There she discovers that it is not just Helen Orme who has secrets to hide. When a man is murdered outside a tavern Letty must investigate before the wrong person is tried for murder.

This is what I would call a ‘gentle’ crime novel, or perhaps what would be called a ‘cosy’ mystery. It is not gritty or bleak but there is violence, though not as dressed or detailed as may be the case in the gritter novels of the genre. There is a warmth to the story telling, lent by both the historical era the book is set in and with the warmth of the characters. Letty’s investigations come at a time before DNA and fingerprints, before evidence collection and photographs were used to identify criminals. The tools available to Letty was her inquisitive nature and intellect, which she uses to brilliant effect.

I was thoroughly charmed by this story, caught up in the first few pages. Letty is a delightful character, a mix of reserved widow, truly mourning the loss of her beloved husband Matt, and a modern forward thinking woman who doesn’t believe her status as a woman should prevent her from her investigative role. She is aware of her faults and embraces instances where her own prejudices have perhaps misled her. She has a lovely relationship with Mrs Bentley, her landlady, often taking charge to ensure the other woman’s health is maintained but there is genuine affection and caring working relationship between the two. Fred, Letty’s brother is funny and engaging, bouncing off the page as a larger than life character who feeds Letty’s investigative desires well. Inspector Blackbeard is the perfect foil for Letty. He is methodical, consistent and not compelled by violent emotions, preferring to find evidence rather than work on emotional instinct. However the relationship between the two thaws and the different investigative tactics work well together.

The story is engaging, starting out with an investigation into the true nature of a woman’s background and resulting in murder, which Letty must investigate before the wrong person is tried for murder. I had figured out the perpetrator about half way through the book but it was enjoyable to read how Letty, Fred and Blackbeard would uncover the truth, given they only had questioning and intuition to aid their investigations. There were times I felt the story was a little long, partly because I had figured out the perpetrator and wanted Letty to twig too, but the story played out well.

The story also focusses on the position women held in 19th Century life. The main theme of this is the double standards towards the actions of women. For example, a woman’s position regarding property or that a man was allowed to have a mistress, in fact it was almost expected, yet for a woman to commit adultery meant the worst of sins. Similarly, should a woman run away with a man and not marry she lost her position in society for ever. A man could continue to hold his head high. These issues aren’t dealt with in a dry or lecturing manner. They are dealt with in a manner that would be expected from a woman of the time, that is with quiet outrage and reluctant acceptance.

In summary, an engaging, entertaining read. I enjoyed this introduction to Laetitia Rodd immensely and am very much looking forward to the next book in the series. If you enjoy historical crime novels, with engaging characters and a softer, cosier edge then this one is perfect to curl up with.

My thanks to the publishers for my review copy of the book.