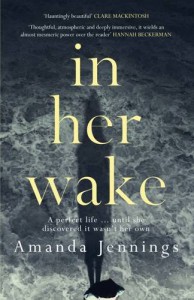 Bella Campbell is returning to her child-hood home to bury her beloved mother, Elaine. But further tragedy strikes and Bella finds that everything she knows is tumbling down around her. She flees to Cornwall determined to find the truth behind a terrible act committed 25 years ago and as she does she discovers more about herself, and lays old ghosts to rest.

Bella was a product of her upbringing. Raised in a house with locked doors and windows, home-schooled and with only an imaginary friend for company she was timid, easily led and pliable, which led her to marry David, her much older University lecturer; who in turn coddles her to the point of smothering. His condescending and controlling ways are apparent to the reader from the outset but Bella, inured to being controlled and cosseted by her mother, is, at first, oblivious to her transference from Elaine to David. As she struggles to accept the events that unfold after Elaine’s death she seeks out the one person she could rely on when she was younger, her imaginary friend Tori. As Bella becomes more caught up in events she adopts some of Tori’s persona, a protective mechanism and one which allows her, finally, to exert some control over her life.

There is a slight surreal quality to the book, as if it is set in another era. If it were a film it would be a black and white 1940’s drama. The location of the wild Cornish coast aids in this and fits the story perfectly.

This book has been called a psychological thriller though I wouldn’t personally class it as a such. It is more a story of the aftermath of a horrendous crime. A story of two families caught on both sides of the event, and how the lives of each unfold over the intervening years. It is a story of coping with the unthinkable, of finding a way to survive.

The psychological element of the story is to be found in it’s examination of how circumstances can affect a person’s mental health in a myriad of ways, of the steps people are willing to take for love and the selfish depths the human mind can sink to.

None of the characters were without flaws. Each of them were irrevocably scarred as a result of the events of 25 years ago. The book examines how loss can affect a person in different ways. There are weak-willed characters, ones who are despicable in their actions, others stubborn; there are those who elicit little sympathy from the reader and those who rightly gain it all. Amanda Jennings is skilled in creating characters that create such strong feelings from a reader. Each are dealing with circumstances arising from the same event, each deal with it in completely different ways. Each reaction is credible, even if the reader may not empathise with them all.

With In Her Wake Amanda Jennings deftly weaves a tale that draws the reader in and make you want to read more. Full of beautiful, almost lyrical prose, In Her Wake is a compelling tale of how suffering, depression, loss and grief can effect a person in differing ways, and how all of these things can be overcome.