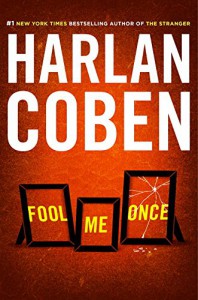 I received a copy of this book from the publisher via Net Galley and this is my honest opinion of the book.

Maya Stern has just had to bury her husband, brutally murdered in Central Park. Given a nanny cam by her friend she is initially unsure about having it in the house but on viewing the footage one night she sees her husband playing with their daughter. Determined to find out, and unsure who she can trust, her investigations lead back to the murder of her sister, moths earlier and an unexplained tragedy from almost 20 years ago.

I found the premise of this story intriguing and I was keen to see how the story would play out. As I began to read I started out with mixed feelings about this book. I found it difficult to engage with it initially. I wasn’t really attached to any of the characters. There were one or two moments when I feared clichéd conspiracy scenes would be the bulk of the story but thankfully that wasn’t the case.  However I did find myself engaged and once I was, I soon flew through the book, eager to find out what would happen.

Though there were plenty of peripheral characters this felt very much like a one woman show. The main character was Maya, who drove the story forward and maintained control throughout. Bits and pieces were revealed about her character, the flashbacks she suffered from her days in the armed forces taking control of her nights. She seemed closed off to all, her relationship with her daughter seemingly distant, perhaps purposefully so. She seemed as if she was a different person to the one she had been before the murder of her sister and the incident that led her to leave the army, despite the reader not having met this ‘before’ Maya. All that said, it did appear that only part so her were being revealed to the reader, with the unknown elements of her being a character almost in their own right. I would have liked to have seen more from certain characters, particularly Shane and Detective Roger Kierce but having read the novel I can see why focus was kept on Maya.

The latter part of the book improved greatly, there were twists and turns aplenty. The title is apt as Harlan Coben does indeed fool the reader as nuggets of information and clues are revealed. The denouement was one I had guessed (I didn’t mind though, enjoying the moment of ‘ah I knew it’), though the eventual outcome was something of a surprise.

In summary this was an engaging and enjoyable read.