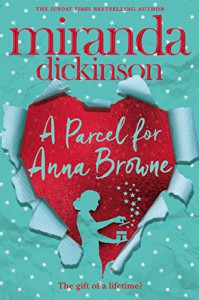 Anna Browne is content with her life. A receptionist at a London newspaper company, it may not have been the career she had envisaged for herself but she is happy. The few friends she has means she has a perfectly adequate social life. One day she receives a parcel at work. Anna has no idea who the sender of the parcel is, or why she has been sent it. The gift inside is beautiful. When Anna wears her present she begins to notice changes around her. The world seems a happier place, or is it Anna. More parcels arrive and with each one Anna slowly changes, which does not go unnoticed to the people around her. Anna soon wants to find out who sent her the parcels, and why.

I really enjoyed this lovely story from Miranda Dickenson. Anna is a lovely character, kind, considerate and unaware as to how important she is to the people in her life, and what effect she has on others, however small the interaction. It was lovely to see how Anna slowly changed and blossomed as each present arrived. She has a history that means she likes to live in the shadows but as each new present arrives Anna emerges as the person she truly is, more confident, outgoing but still the kind considerate Anna her friends and colleagues value. It is this value that Anna becomes more aware of, something she hadn't really considered before.

As for the other characters they were all distinct and each added to the story.  Her colleagues on the reception desk add a lovely comic element to the tale. Anna's friends Tish and Jonah are two opposites but both regard Anna highly, more than she was aware before the gifts arrived.

As for the presents, I looked forward to finding out what each one was just as much as Anna and some of them I wished I could receive.

There were a couple of niggles I had with the book. I did feel it was slightly too long. I don't think that there would have been a detrimental effect to the story if it had been shorter. Also Jonah is from Yorkshire. This of course is not a problem. I'm from Yorkshire, its a wonderful place. But Jonah is virtually always described as being from Yorkshire, or as the 'Yorkshireman'. His vocabulary was almost a caricature. The terms that littered his speech were repeated so often, as if to confirm his heritage, that they did begin to grate.

That said this is a lovely tale, with a magical quality to it.

Yes it is a love story, for there is a romantic element to it. But more importantly its a story about a woman finding out about herself, and falling in love with what she finds in the process.

This is the first book by Miranda Dickenson I have read but it won't be the last. I'll be on the lookout for more of her books in the future.