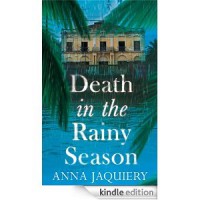 I received a copy of this book from the publisher and this is my honest review.

Commandant Serge Morel, usually entrenched in Paris, finds himself torn away from his holiday in Cambodia. Travelling to Phnom Penh on the orders of his boss, Morel finds himself investigating the murder of a French citizen. With pressure from on high and little assistance from the local police, Morel soon finds himself caught up in a mystery he may not be able to solve.

This is the second novel to feature Serge Morel, following on from Anna Jaquiery's debut The Lying Down Room. This time we see Morel away from his team in Paris, the team who rounded out the story and made it a great ensemble piece. However, don't think that I enjoyed this book any less because Morel was flying solo on this investigation. In fact there are enough appearances of colleagues to keep them fresh in the reader's memory I loved this book as much as the first.

I soon found myself transported to Cambodia. I could easily imagine Morel walking round the streets, sweltering in the humidity and hiding away from the monsoon rains.

Anna Jaquiery's writing draws you in. It has the ability to wrap you up in the story, drowning out the real world. This isn't an easy task but is carried out with aplomb.

Death in the Rainy Season provides the reader with the opportunity to get to know Morel even more, rounding out his character to a greater degree. We find out more about his family, this time focussing more on his deceased mother, who was from Cambodia. It was good to see more of Morel on his own, developing his character away from home but also somewhere he is linked.

The mystery is engaging. Morel is baffled as to why the dead man was murdered in a hotel room under a different name and has to deal with both suspects and the police holding back information. There were enough red herrings to keep me guessing until very near the dénouement and I enjoyed piecing together the mystery.

Anna Jaquiery has joined the ranks of the authors whose books I eagerly await. Morel is well on his way of becoming a favourite detective and I am impatiently waiting for his next investigation.