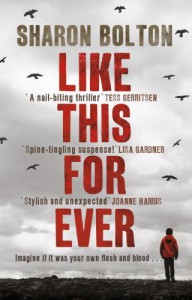 Young boys are going missing around London, their bodies being found days later, the latest, twins, found on a beach laid peacefully next to each other. The police have little to go on, and what they do know is being hampered by interfering TV experts and a crazed contributor to Facebook. Twelve year old Barney thinks that he knows what is happening, and who the killer is. The thought is almost to painful to bear, hiding it from everyone, including next door neighbour Lacey Flint.

This is the third outing for Lacey Flint and we find her still on sick leave following the events in Dead Scared. She is adamant that she will stay out of this investigation but soon finds herself drawn into what is happening. All the while she is fighting her own demons, struggling with what had happened to her previously and her with her feelings for DI Mark Joesbury.

This is more of an ensemble novel, all the main side characters from the first two books in the series are there, getting equal footing with Lacey, and indeed we see more of the development of these characters. The character who gets the most page time seems to be Barney, a boy with special gifts, brought up by his father and searching for the mother he can barely remember.

It took me longer to get into this book than it did Now You See Me and Dead Scared. This may have been because I had read the first two back to back but I don't think I was getting Lacey Flint jaded. I did however find myself flying through the last two hundred pages to the gripping conclusion, the fact that I'd guessed the outcome making it no less gripping.

This has all the things I've come to expect from a Sharon Bolton novel, a darkness to the story, a great cast of characters both old and new, good and bad and once I had got into it, a gripping read. On finishing the last page I went and dug out my copy A Dark and Twisted Tide, the latest in the Lacey Flint series.